Of the monstrous pictures of whales. 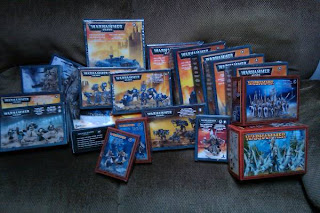 This is the story of a man with an obsession. It's the story of a man, blade in hand, poised to embark upon an impossible voyage of conquest. He is alone save for the eyes of the gods, which remain fixed upon him in mute judgment. The legions of his adversary are practically innumerable.

I'm talking, of course, about the obscene amount of unpainted Games Workshop product in my closet.

It's a situation far too many hobbyists find ourselves in - the rampant accrual of toy soldiers (henceforth referred to as "dudes") without an accompanying rise in painted models. Taking stock recently, I realized my home is awash in a sea of unpainted, partially-assembled dudes. I blame Games Workshop for producing such high-quality models and my parents for my poor impulse control. Still, it seems like if there's a time for something to be done, it's now. Actually, that time has probably come and gone, but better late than never, right?

First, some background. I bought the 5th edition Warhammer Fantasy boxed set on a family vacation when I was 12, and started playing Warhammer 40k in my early teens. A few friends and I played intermittently throughout the first half of college, but due to waning interest, growing frustration, and a series of scary student loan bills, I sold my entire collection (including most of my painted armies) to an acquaintance for cheap shortly after graduation. I was convinced my Games Workshop days were behind me until a few years later when I began to feel the siren call again and discovered the fine folks over at Philadelphia Area Gaming Enthusiasts. With reckless abandon I shortly amassed a small mountain of plastic and a whole heap of excuses. I've been with the club for close to two years(!) now, and still don't have a proper army to show for it. The shame!

So now it's time to see what I've got. The object of this challenge is to complete a 1500 point army for BOTH Warhammer Fantasy Battles AND Warhammer, 40,000 in the following months:

The U is for "U better get this shit done."

The rules are simple. I've got until year's end to complete my task, no excuses. It's a tall order. Along the way I'll call upon my fellow gamers to critique my progress and, should I fail, decide my fate. I'll need to work hard lest I find myself at the mercy of these pitiless overlords.