Down, Down to Goblin Town

I've been knee-deep in green over the past few days, so I thought I'd report on some of my progress and talk a little about my plans for the goblin project. Last night was a rare no-plans-at-all night so I had blocked it off as hobby time, but about an hour into it a friend stopped by and wanted to go on a bike ride, so, priorities.

A few months ago I picked up two packages of Games Workshop's modular movement trays, and last night I assembled a few of them. I know that I want to start the army with at least two units of 50 goblins each in horde formation, so I cut the ten by ten (20mm spaces, not inches) sheet that comes with the package in half. It's very easy to score and snap with an xacto and a straightedge. Then it's just a matter of removing the plastic "lips" and gluing them to the sides. This part requires a razor saw, but on the whole it was still incredibly easy. I was surprised by the value of this kit and would certainly recommend it. Of course, it's easy to construct your own movement trays out of cardboard and popsicle sticks, but for the ease of construction, sturdiness, and most importantly, time saved, I'll stick with the modular trays.

Here's a few blurry cell phone pictures of some of my progress: 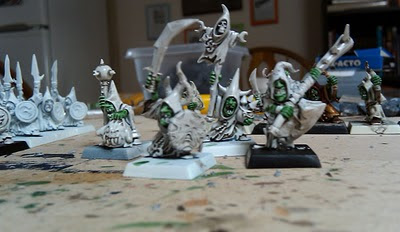 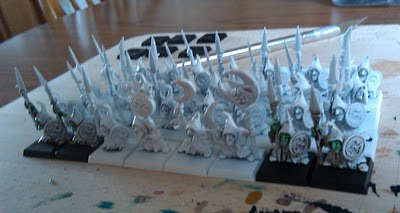 This is part of a unit.

King Under the Mountain

Games Workshop has always treated Orcs and Goblins as the comic relief of their setting, but I'm inspired to put some of the fear back into them. Really, what's so funny about hordes of deformed subterranean creatures who know only malice and hatred, whose chanting fills the ancient halls, and who periodically spill forth in vast waves, wreaking vengeance against the hated surface-dwellers? Sounds terrifying to me.

To that end, the power behind this barely-contained force of devastation is the Underking, a self-styled abyssal regent (counts-as Skarsnik). Having subjugated dozens of night goblin tribes, he holds court in an ancient dwarven throne room among a rabble of sycophants, advisors, and slaves. The army will contain only night goblins and count-as night goblins (spider riders, for example) as well as the various beasts that populate the unlit halls: spiders, swarms of bats (counts as snotlings!), cave trolls, and, of course, lots of squigs. I have a few more ideas, as well, but I'll save those for future updates. In the meantime, I'm pretty excited about goblins. As I learned in my youth, goblins who live in caves are badass.