Goblins Great and Not so Great

After watching Kevin's Tzeentch d(a)emon army thrash Jon's Dwarfs on Sunday evening, I had a chance to try the goblins in a small 1,000 point "Blood and Glory" scenario. My opponent was Kevin and his victorious demons, and luckily both Kevin and Jon brought along extra goblin models so I was able to try out some units I don't own.


We ended up calling the game as it was getting late, but it's almost certain Kevin would have won. Because of the goblins' leadership issues I brought a Warboss and a Battle Standard Bearer, so without any magic users in my army, Kevin was able to run roughshod over my units in the magic phase, killing over half of my 50-goblin horde unit with one casting of Dwellers Below. To be fair, I probably wouldn't have bested a chaos god of magic regardless, but it's a good lesson about dispel scrolls.

Overall, I learned a lot more about the types of units I'd like to use. I'm impressed by Trolls' survivability and saw the importance of using Fanatics firsthand. There was also an underwhelming performance by the Doom Diver, but I may need to give it another shot (no pun intended).

I've been painting goblins and will post a few shots tomorrow if my camera cooperates. In the meantime, here's a WIP shot of a model I threw together. I've been pondering how to deal with the Night Goblins' sever leadership issues, so I sat down last week and came up with The Great Goblin, my interpretation of Skarsnik: 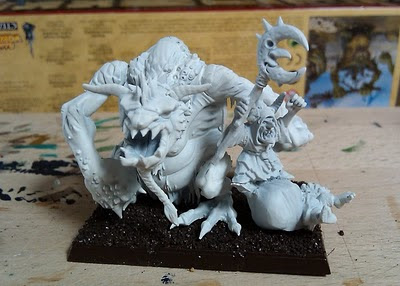 The Great Goblin and his bodyguard, "Grandfather"


He's standing on a bag of slaves and other captives - the bit is from the plastic giant kit. I de-riverized a plastic River Troll by removing the webbing from the feet and ears, adding horns and a beard - the goblins need something to do between battles other than taking 'shrooms, and braiding troll-beards is as good a hobby as any, I guess. When I add more trolls to the army I'll do them this way and call them Hill Trolls or Cave Trolls or something.
Posted by Jason at 9:16 AM