I've been stealing a few spare moments over the last week to do a little modeling. In the past few days I've primed and laid down the initial wash on a bunch of goblins, and I've been getting some goblins on their bases.

I'm pretty happy with my basing scheme. Once I've got my basing material glued to the base, I prime with a very dark brown spray I picked up cheaply at the hardware store and the base gets a quick drybrush of snakebite leather. Then I pop on a goblin, which has been primed separately (the goblin needs to be sprayed white for the painting method I'm using - I'll detail that at a later date). After the miniature's been painted, I'll throw on some "Swamp Tuft." Because I'm panting the Night Goblins' robes brown instead of the customary black, I'm worried there's going to be alot of brown and green, but my intention is to try to achieve a more naturalistic appearance, so I'm not too worried. 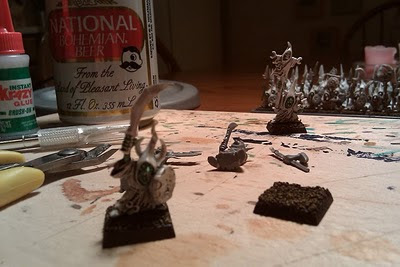 Before Sunday's game, I'd like to get the first two ranks of two units painted, which means I need to completely finish 34 models. I also need to get the rest of my army in a playable state, though, so first I need to prioritize.

As I type this, the glue is curing on the Battle Standard Bearer I threw together last night. When I get home I'll put some primer on him and most likely be so excited about the prospect of painting him that I'll forget about everything else.
Posted by Jason at 7:45 AM