There's no wrong way to paint a goblin.

Remember when Peter Jackson made a bunch of movies about hobbits, and everything on screen was brown or green? I really like that aesthetic. Sure, it's still fantasy, but it somehow feels more viable than the technicolor illustrations from the Player's Handbook of yesteryear. That's why I decided to eschew the traditional jet-black night goblin wardrobe in favor of an earthier approach. 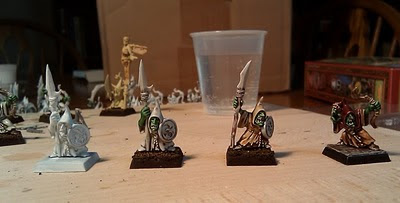 Here's what I did:

The models certainly aren't winning any awards, but I'm very pleased with the end result. I think there's a number of advantages to this process. For one, it's fast. While each color requires multiple coats and a modicum of brush control, it's extremely quick to finish a layer, so batch painting lets me finish ranks at a time, rather than models. I also enjoy the high-contrast, gritty look. Because you're building up the color in layers, you can give a unit a lot of texture by varying the recipe slightly from model to model without significantly impacting your painting time. This lends itself perfectly to mimicking the homespun rabble of a night goblin horde while retaining a unified palette.

That said, there are a few drawbacks, as well. Because the wash needs to pool to do its work, small models with a lot of drapery or other textures (like night goblins) work best. Also, I haven't had pleasing results with other brands of inks and washes, so the color palette is necessarily limited. This suits me, aesthetically, but it does mean that everything I paint tends to be muddy brown and green and it makes painting certain armies impossible. Doing Bretonnians in this style would be a challenge, for example (one I'd like to try some day...). They also come out looking a little glossy in pictures, but it's minimal in person and a little matte varnish goes a long way. Over time, sunlight may be an issue, as washes can fade, but I store my miniatures in the dark, so I don't think it will be noticeable. I've been pawing at that tired old test model (far right in the picture above) for about a year and a half now and had him on a table that gets direct sunlight for weeks at a time and I haven't seen any fading.

Only another several hundred goblins to go. To war! Raise the (tabletop) standard!
Posted by Jason at 9:49 AM