Blood on the Streets!

No updates for a while, because I've been waiting for my plans to come to fruition. Fortunately, the time is right. I present: Mordheim! 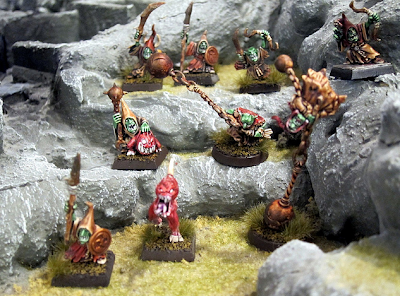 Not pictured: the other half of the gang

Last week, a few of the folks at PAGE got together to play the first game of our ongoing Mordheim league using the Coreheim rules. The battle featured a three-player face-off between Steve's Skaven, my buddy Matt's undead, and of course, my fledgling goblin warband. You can read about the action from the undead perspective over on Sarcophagi, and check out more pictures here and here. 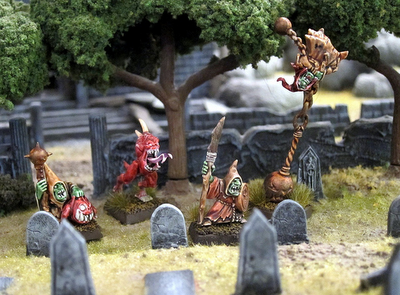 I wasn't able to record much of the battle, but I did some digging and came up with a fragment from the Imperial Archives:

"…inferior masonry and long periods of neglect, to say nothing of the damage wrought by celestial phenomena. Archaeological evidence supports the claim that by now large sections of the city surrounding the cathedral were overrun by numerous rodents, perhaps of unusual size. Writings in the [suppressed by the edict of the Order of Sigmar] suggest that, immediately following the calamity, foul wizards overturned the graves in the courtyard for their own dark purposes. What these so-called scholars fail to realize, however, is that the cathedral's catacombs had in fact been the notorious haunt of necromancers for some time, perhaps even prior to the destruction.

Worse still, an expedition led by Josef the Tall, of blessed memory, uncovered a natural passage to a series of caverns adjoined to the cathedral's sub-basement. I propose, much to the dismay of the cretins of the Imperial Library in Altdorf, that these caverns are not, as they claim, a mere dead-end (although they were for Josef, ha! ha! ha!), but instead the terminus of a vast subterranean highway that extends even now beneath the Empire. Further, I intend to prove that it was neither sorcerers nor monstrous vermin that ravaged the cathedral's reliquary, stealing the tongue of Hallowed Hieronymus Twiceborn (the thrice-dead), but something else entirely. Perhaps a clan of troglodytic depth-dwellers, heretofore undiscovered. Indeed, reader, press on, for this I intend to prove, and you will know that the would-be wisemen in Altdorf are fools! Fools, I say! Fools!"


All in all, it was a good run for the goblins, even though (or, especially because) they didn't get mixed up in much of the fighting. The archer henchmen gained a point of Ballistic Skill, the spear-wielding henchmen gained a point of Weapon Skill, and the Shaman got his hands on a talisman which will increase his magical capabilities. The rest of the band made some coin in the process. Things are progressing nicely. Plans are in motion... 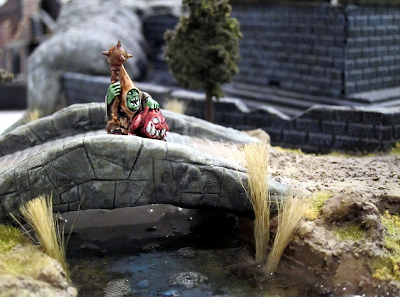 Down by the bridge, looking for trolls...