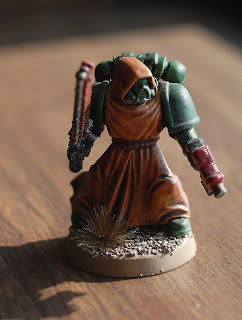 Shadowy figures...
More pictures on flickr. I like this set because it was taken by Christina, who knows a lot about photography but almost nothing about miniatures, which is a nice change of pace.

One of the things that first attracted me to Warhammer 40,000 in my callow youth was the game’s grim, operatic setting. It’s Star Wars without the naïveté, a universe like our own, where no one gets along and the best you can hope to be is morally neutral. Sure, Warhammer 40,000’s bleakness is over the top and probably just as much of a cartoon as traditional “black hat vs. white hat” settings, but the grit is compelling.
That’s probably why I’ve always been a fan of the Dark Angels, the knights in tarnished armor who all but define the term “antihero.” With their storied history and secretive nature, the Dark Angels are billed as engaging and morally complex. But are they?
Read more »
Posted by Jason at 12:41 PM No comments:

Deathwing 2500 points, for real this time

With just under a month left until 'Ard Boyz, it's time to go into extreme task-oriented mode.

It's the final countdown
Read more »
Posted by Jason at 10:23 AM No comments:

Sunday night gaming is picking up. Recently, I got some table time against 1500 points of Joe's Kingbreakers Space Marines. We generated the mission randomly, and it turned out to be a classic: Annihilation with Pitched Battle deployment rules.

I made it out to the game club last weekend where I had the opportunity to face off against Colin's Nurgle-heavy Chaos marine army at the 2000 point level. We rolled Capture and Control with a Dawn of War deployment. The mission practically guaranteed a draw, but the deployment type favored my close-range heavy infantry.