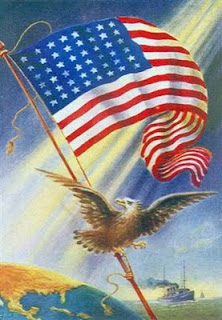 The only GW here is George Washington.
I've been buying Games Workshop models pretty regularly for the past 15 or so years now, and in that time I haven't purchased more than one or two products from competing companies. For the most part that's because the production quality and art direction of GW models are top notch, but recently I've been curious about what I'm missing. In that spirit, I recently picked up two boxed sets of the finest American miniatures made by Great Britain - the Federated States of America starter set by Spartan Games, and American Civil War infantry by Perry Miniatures.

Email ThisBlogThis!Share to TwitterShare to FacebookShare to Pinterest
Labels: Dystopian Wars, miniatures, review, The Other Guys

Due to a recent bout of insomnia, this model is much closer to completion than the photograph suggests, but here's what I've been working on lately. 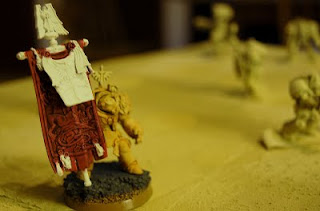 One flag is just not enough.

I'm thinking about heading over to Alternate Universes in Blue Bell on 9/17 for a 2,000 point tournament. This gives me about a month to get everything assembled, inked, and based, which is reasonable.

Here's how things stand at the moment: 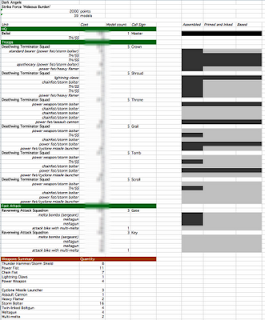 Point values have been blurred to protect the innocent
Posted by Jason at 2:02 PM No comments:

The dust from 'Ard Boyz has cleared, and 2,500 points of terminators are all back on the shelves. At 12 players, there was a decent turnout, and the staff at Redcap's managed everything smoothly. I learned some rough lessons, but overall I'm happy with the results:
I believe this puts me at around 17 points for the tournament - probably toward the bottom of the pile (update: I tied for 6th of 12), but every point was well-earned. The second round was particularly close and I nearly pulled off a draw, which I'll count as a morale victory against my opponent's formidable Guard list. 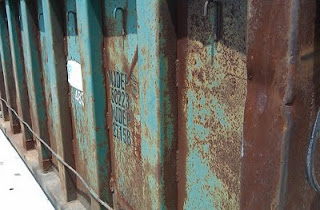 It's not a dumpster, it's a Rhino.

It's not exactly a revelation, but observing objects in your environment is a great way to increase your painting skills. Today I walked past a decommissioned Dark Angels Rhino. Having just assembled a Rhino, I'm excited to try to replicate this weathering in the next few weeks using the hair spray weathering technique.
Posted by Jason at 10:16 AM 4 comments: