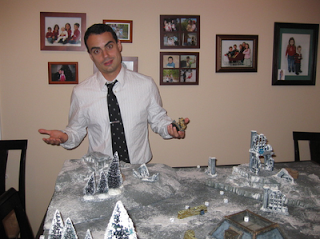 Deployment is hard.
During the late stages of the Utani Offensive, Imperial forces suffered a series of defeats due to a communications breakdown in the sprawling coalition command structure. Of the diverse forces represented, the Valhallan 554th under Captain Vladimir "The Yeti" Gloval remained focused on the larger war while attendant Imperial guard, Space Marine, and Adeptus Mechanicus forces pursued their own objectives.

Seeing an opportunity to outmaneuver the enemy, Captain Gloval deployed his forces to Weyland's Rock, a planet well-suited to the 554th's combat expertise. Grand Master Azrael of the Dark Angels disapproved of Gloval's plan and demanded the Valhallans return to the front immediately. When Gloval refused, the Grand Master dispatched a delegation under the command of Master Belial of the Deathwing. The Deathwing intercepted the 554th on the windswept Gallows Point. Their mission was to convince the commander to reconsider his movements...

Matt and I met up for a 1,000 point "take and hold" game on his gorgeous 4'x4' tundra table. I wasn't sure what to expect, and it was a hard-fought game to the end, neither side coming out the clear victor until the final turn. In short, it was brutal, bloody, and rewarding. Unfortunately, even the prayer of invisibility from the Imperial Guardsman's Uplifting Primer (read aloud by my opponent) couldn't save the 554th, and the Dark Angels carried the day for their own nefarious purposes. Here are some highlights. 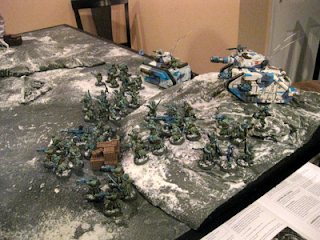 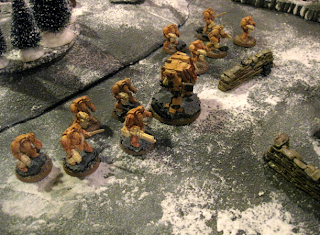 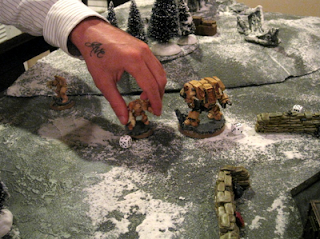 The hand of doom descends... 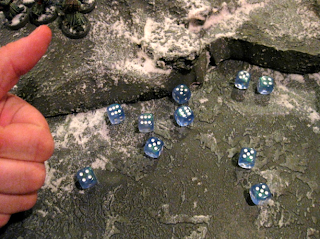 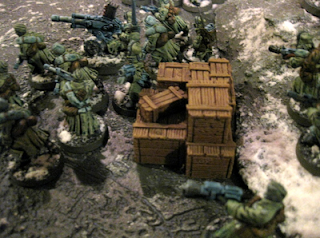 Boxes! Defend the boxes!
In the face of the Deathwing's aggression, Gloval's forces were depleted and he was forced to abandon Weyland's Rock. The Utani Offensive remained a grueling meatgrinder for Imperial forces, lasting another 20 years and claiming untold lives, including significant casualties among the 4th battle company of the Kingbreakers space marine chapter. Finally, the offensive ended when Weyland's Rock and other outlying worlds were virus bombed. Glory to the Imperium.
Posted by Jason at 8:53 AM