Shaka, When the Walls Fell

Warhammer Fantasy hit the table again, this time it was Dwarfs vs. Orcs in a classic showdown. This is the stuff starter box cover art is made of, especially given that both armies were painted by the prolific Dungeon Painter. I took command of a mixed-composition Orc war party while Jon fielded his no-nonsense Dwarf gun line. 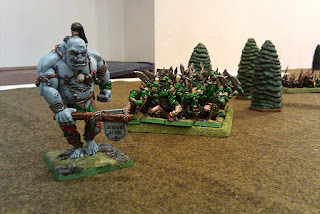 Big news.
We played the standard scenario at 1,000 points and I won the roll for deployment, placing a block of goblins (with a full complement of fanatics) in the center of my deployment zone. I attempted to place less important and highly mobile troops first until he placed his war machines. Once the Grudge Thrower and Organ Gun were in position, I clustered the rest of my forces on the opposite flank to avoid as much incoming fire as possible and helpfully sweep down the gun line at leisure. Jon opted for a more general, reflexive deployment.

My gambit met with limited success due to a mixture of poor planning and bad animosity rolls on my part, but critically, two of my three core infantry choices (including my warboss) did not make it into close combat and the goblins destroyed themselves with their own fanatics. The giant singlehandedly destroyed a unit of miners and routed a unit of warriors, but unfortunately he wasn't able to finish them off to draw the game. Meanwhile Jon's Grudge Thrower systematically dismantled my spider riders with suspiciously accurate artillery fire and the thunderers finished off the wounded giant to win the game.

A well-deserved victory to Jon. But Orcs are never beaten... 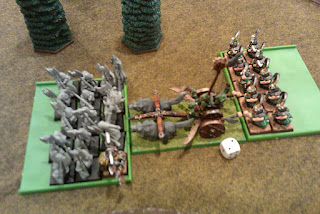