I was working in the lab late one night...

Following the auguries written in the night sky, the sorcerer Cenobael the Bloodless leads a band to claim the ancient ruins at the Blasted Heath. 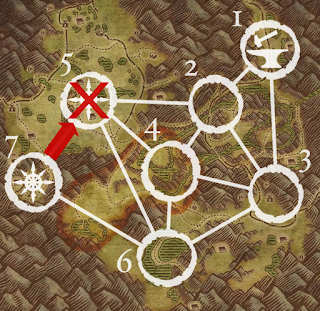 The opening Chaos gambit is repulsed by the Dwarfs
Read more »
Posted by Jason at 6:46 AM 1 comment:

As promised, here are the rules Jon and I will be using to fight the campaign.
Read more »
Posted by Jason at 6:02 AM No comments:

One of the greatest things about a campaign is the endless decisions.

"The shortest way would be through the pass at Cirith Ungol, but that is narrow and dangerous to move an army through."

And so he decided to  march along the mountains north, and then west, to the haunted pass of Cirith Gorgor, and the untold legions of the Black Lord.

"Why so glum, wizard? Does the mere thought of Sauron's vast forces overwhelm your spirit?

"This war is without final hope. Victory cannot be achieved by force of arms, whether you sit here to endure siege after siege, or march out to be overwhelmed. You have only a choice of evils."

"Then, if the choice be mine, I choose to march!"

Enter the Marshes of Madness!

For all of my disappointment with the Blood in the Badlands supplement (see my previous post), I have to admit, it's inspired me. Maybe that's worth $33. I'm proud to present the campaign map for The Marshes of Madness, a 2-player Warhammer Fantasy Battles campaign designed specifically to pit Jon's Dwarfs against my Warriors of Chaos in a series of linked battles. 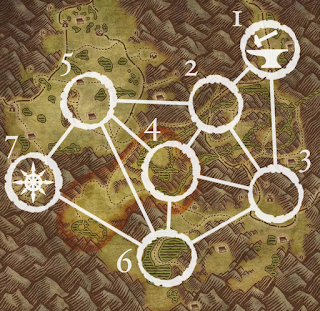 Follow your nodes.
I'll post the rules tomorrow - the opening battle is on Sunday. Psyched!
Posted by Jason at 1:32 PM No comments:

Blood in the Badlands Impressions

After having a few days with the Blood in the Badlands book, I'm not overly satisfied with my purchase. I was hoping it would be a "campaign in a box" like the old Idol of Gork set. Unfortunately, it's not much more than a hardbound White Dwarf issue.

Retailing at $33, it's a slim volume, and it gets much slimmer when you discount the battle reports, which take up at least half of the book. What's left is an interesting but unfortunately pamphlet-sized collection of background material, campaign rules, and a few scenarios. What little rules the book does provide rely on the Mighty Empires and Storm of Magic campaign supplements - so although you could certainly get along without them, if you haven't invested in these additional expansions, Blood in the Badlands is an even lesser value.

I was also disappointed to find (and this isn't Games Workshop's fault, just an unhappy coincidence), that the army special rules for Dwarves and Warriors of Chaos cancel each other out. So, Jon, it might be time to recruit other participants for the campaign.

It's not all bad. The production value is extremely high, as always, and the hardcover is nice. What rules the supplement does provide seem to be enough to create an interesting experience without emphasizing the campaign over individual battles too much. I don't even mind the army features and battle reports too much - they're fun to read - I just wish they would have saved them for the magazine. In addition to the overwhelming amount of battle reports and campaign journals, the book is full of little sidebars and callouts featuring the studio's inside jokes. I can't help but feel that I've just spent money to read about someone else having fun.

Hopefully it'll be just as much fun when I get a chance to try it out for myself.
Posted by Jason at 7:24 AM 1 comment:

Death! Destruction! The Dark Gods! It's all part of a Sunday afternoon.

Jon and I played two 1,000 point games this weekend as part of our quest for mastery over the Warhammer Fantasy system before we start looking for some tournaments. We decided to play both games by the book, using all of the crazy terrain generation rules.

At the end of the day we each took home a win. I won the first game by massing my forces in a corner and applying as much pressure as possible to Jon's left flank. A large hill in the center of the table helped hide my units from Jon's Organ Gun and Thunderers while I chomped through his dudes piece by piece. In the second game, I foolishly deployed my knights immediately in front of the Dwarven artillery, and due to a failed charge (4 inches on 3d6, really?) and poor rolls on my Blasted Standard, Jon mercilessly obliterated ~30% of my army in one fell swoop. Elsewhere, his Ironbreakers cut down my ogres to seal the game.

I think we're both becoming much more comfortable with the system. We're planning another game this Sunday, and I hope to assemble another unit or two before then so we can move to 1,500 points. In my current list, I have about 500 points tied up in 9 models, and it's starting to catch up with me, so I'll need to get more troops on the table soon.

I also need to rethink my magic. I've been having some success with the Lore of Tzeentch (in our first game, my Sorcerer pulled off Treason, causing the crew of the Organ Gun to slaughter each other in one turn), but it' seems pretty situational - I'm finding there are a lot of instances where I have wasted magic dice at the end of the turn due to a lack of targets or spells.

Jon and I both pre-ordered the new campaign book, so I hope we'll get a chance to start playing some linked games soon. Clearly, there is a rivalry brewing between my northern barbarians and Jon's bearded heroes.
Posted by Jason at 9:48 AM 2 comments:

Darmok and Jalad at Tanagra

I don't like multiplayer miniatures games. Between setup and the increased downtime, there's far too much waiting around, and at least one player always seems to be marginalized. Multiplayer games have their virtues, though, and when they come off the right way, they're good for hanging around with friends (and it's a good way to initiate a new player).

We had an odd number of Fantasy players and a shortage of tables the other night at the club, so we decided to try out a multiplayer game. The forces were arrayed thusly, and after some gentlemanly chatter, we took to the field of glorious battle: