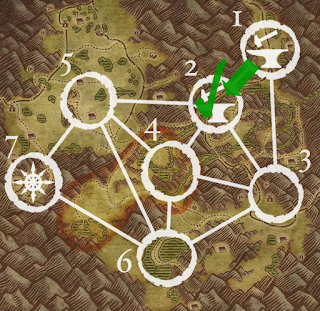 The Dwarfs seize the initiative
As I lost our opening game, campaign control reverted to Jon and it was up to him to choose a point of attack. In order to shorten the campaign and increase the benefits of winning a game (as is proper), we decided to forgo our original campaign turn rules and adopt the volleyball model: the winning player will continue to choose the battle site until he loses, at which point control reverts to his opponent. With that in mind, Jon set out to choose his first target.

He decided to march through Marrow Pass to approach the last known area of Chaos activity at the Blasted Heath. Per the campaign rules, we played the refreshing Battle for the Pass scenario. Both players deployed relative to the short edges of the board, although the armies still started within 24" of each other. The terrain was typical - a few hills and woods - but we also had an 18" section of castle wall with a portcullis. For fun, we decided to put it square in the middle of the table - an ancient Dwarven gate, perhaps?

I hid my knights behind the wall, safe from the Dwarven artillery, and put two blocks of Warriors of Chaos on the opposite flank. Earlier we had decided that units could march through the portcullis but I didn't really want to deal with the headache of trying to decide just how that was possible in the middle of the game, and I also wanted to force Jon to decide which threat to deal with. I also decided to try out a few new units in this game as I'm still exploring the army list, so I brought a tooled-up close combat Chaos Champion and the much-maligned Daemon Prince. I also decided to skip the Lore of Tzeentch on the Sorcerer this time in favor of the Lore of Shadows (also the Lore of Dwarf-Killing).
By the game's end I managed to destroy all of the artillery, but not before a crack shot from the Grudge Thrower splattered my Chaos Champion all over his comrades. On the opposite flank, the knights performed an effective charge but couldn't clear the dreaded cavalry hurdle and spent the rest of the game bogged down in a protracted struggle with Jon's Ironbreakers. A noble effort, but victory: Dwarfs.
We didn't roll for after-battle effects, but even before they're applied Jon has been pressing his advantage. Since he won, he'll be on the attack for the next game. Will he push through the Blasted Heath on his way to the Chaos stronghold, or will he make an expedition to the Ruins of Morgheim for some magical backup? Or will he detour to the Oathgold mine to fortify his position?
Seriously, there's no telling. This dude is crazy.
Posted by Jason at 11:14 AM