There's No Easy Way to Say This

Reports are in from the recent doubles tournament. 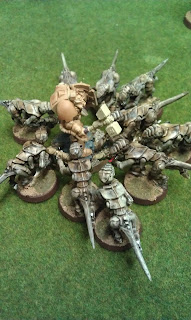 This about sums it up.

To put it lightly, Jon and I did not do well. The day was a comedy of errors as our losses got progressively grander in scale, starting with a well-deserved but barely-clinched win by our opponents in game one down to an absolute slaughter that had me checking my watch in game three. I think ultimately Jon and I deserved the losses as we did not think nearly as hard about strategy as we pretended, so there's no sour grapes here. We had some fairly unpleasant opponents in game three but beyond that it was good to get out and play some games. As a good friend mentioned, doubles tournaments are a sure win because even if you end up bombing (and bomb we did), it's still a solid day of hanging out with some friends. Redcap's, as always, put on a great event that was well worth the entry fee.

The most important lesson learned? I need to play more Fantasy. It's not a /ragequit thing (my win/loss ratio is much, much better in 40k), I just find that Fantasy is more fun. I've been hitting the painting table regularly lately and should have a fairly large update within the next few weeks.
Posted by Jason at 8:26 AM