In The Air Tonight

The Deathwing Alpha Strike should hit like the drum solo from a Phil Collins song.

Email ThisBlogThis!Share to TwitterShare to FacebookShare to Pinterest
Labels: whatever man 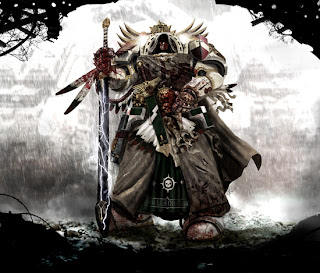 Forget your past life. From this day forward you are simply a Dark Angel. Nothing else is of consequence, the Chapter is all that matters.

And lo, Supreme Grand Master Azrael did survey the serried ranks of the Deathwing, and he called them good. Thus did he send them, five by five, against the enemies of the Imperium. But his heart was heavy, for they did fall in their numbers to plasma shot and melta blast, and it was really freaking hard to shoehorn an extra squad into a 1,500 point army list. But then a hunched figure, laden with heavy robes, did speak unto our beloved commander. And he said, "Forgive me, my lord, for I am but a lowly game designer, but could thou not send seven or eight terminators, where five would fall?" And Azrael smiled upon him, and named him Jeremy Vetock, and it was good. But it was deemed that Belial's sword should still suck, for the Dark Angels are an intractable lot. But the tactical squad sucketh not, and the green marine is exalted in the sight of the Emperor. 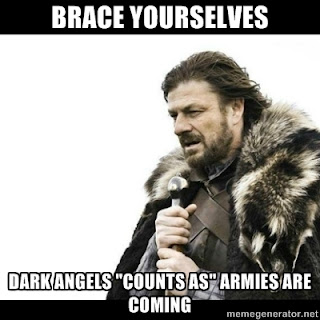