It's the Little Things That Count

For my most recent competitive play effort, I headed over to a super-casual 2,000 point tournament at my neighborhood game store, Top Deck Games in Westmont, NJ. 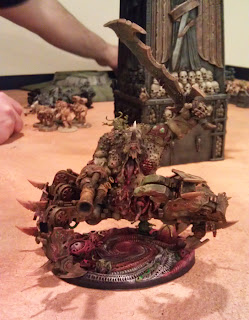 ...but it's usually the big things.
Top Deck has a good-sized "private" (insofar that it's isolated from the perpetual Magic: the Gathering tournaments) miniatures gaming room with about six permanent tables. Turnout was pretty low at eight players exactly, five of them being non-regulars that came in specifically for the event.

Overall, the event was a success and it was a great way to spend a rainy Saturday. I had a few minor complaints, though, which I'll mention before I tell you how I did so you can decide whether it's sour grapes. First, no soft scoring, although I had been told prior to the event there would be. I didn't really mind since I'm used to that convention, and I would have been soundly thrashed in both sportsmanship (every last person there was a top-notch dude) and painting. The armies just got more and more beautiful as I progressed through the rounds, culminating in the Soulgrinder you see up top there, which I'd call the centerpiece of that particular army except for the fact that everything was painted and converted so creatively that it'd be hard to say what's really the most eye-catching model. 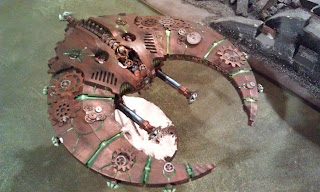 My real complaint was the lack of battle points, or any other determining factors, in calculating victory. Overall victory was determined by straight wins, meaning that the players who won the first and second rounds split the prize pool and walked out before round three. Fair play, I suppose, but it sort of sucked the wind out of the last round as the rest of us dirt-farmers scrambled for third place. Also, at this point, everyone who was left over (other than me) came from the same gaming group, so they spent the last few hours facing off against regular opponents. Admittedly that's a hazard of any competitive scene, but it was still a bit anticlimactic. It's not clear to me whether winners were being matched against winners or simply at random, but the other real problem was the selection of missions, which was made before each round by an employee who doesn't play Warhammer. so we ended up playing Big Guns Never Tire twice, and we didn't play Purge the Alien at all. Terrain was also a little scarce, although there was at least twice as much terrain neatly stocked on the shelves next to the tables.

But I'm merely presenting all of this information as my report. I see all of these things as areas for improvement at a store that is very, very new to 40k events. As I said, the atmosphere was just about perfect, and that's much more important to the long-term success of a regular local tournament scene.

On to the games:

Round one: The Emperor's Will: vs. Tyranids: My first opponent was a friendly acquaintance with a 'Nidzilla list features a pair of flying Hive Tyrants. In what would become the theme of the day, I was extremely glad to have brought a quad gun and a couple of flakk missiles. We placed our objectives in opposite corners and my home guard did a good job of shooting bugs from behind their big metal wall to keep the base clear, while Belial's squad predictably dropped onto the enemy objective. In the end, it would have been a win but I made a huge error and decided to try to hunker down and deny his objective with Belial instead of moving and squashing his tiny squad of 4 gaunts. Belial finally want down to massive Tyranid shooting, the gaunt grabbed the objective to tie the game, and the sneaky remaining Hive Tyrant soared across the board to claim linebreaker and win. This was a great game and a well-deserved loss on my part as it was very close until I made my miscalculation. Those dumb little decisions are key.

Round two: Big Guns Never Tire: vs. Necrons with Ork allies: I got lucky and grabbed two of the three objectives for my deployment zone, so I bunkered up and sent Belial on his customary disruption mission. There wasn't much satisfactory shooting as there was some large line of sight blocking terrain in the center of the board. My opponent's opening gambit was to send a large squad of nob bikers straight at my lines. Man, did I underestimate these. Brutal. After shooting them for one turn with everything I had, I sent two squads of terminators in (14 total) to mop  up… or so I thought. It ended up taking the entirety of both terminator squads and four full game turns, but I was just barely able to get rid of them while my bunker squads just kind of watched nervously. Meanwhile I defended against a late-game objective grab from a Necron lord and warriors in a Night Scythe while Belial's squad continued to chip away at a huge mob of ork boy defending my opponent's objective. When the dust finally cleared I had three ragged squads, no more than three models each, holding onto each of the three objectives, plus first blood, warlord, and linebreaker. On paper, a perfect victory but the board told a very different story, and this was another of those extremely bloody, very close victories I've been having lately.

Round three: Big Guns Never Tire (The Revenge): vs. Chaos Marines with chaos Daemons: This one was short and nasty. I started out strong… for about half a turn. Belial's entire squad didn't see a second turn, and it all went downhill from there. I tried to do what I did in round two in terms of bunkering and sending Belial to disrupt the other objective. In retrospect I had three of the five objectives on the table, so I should have played more defensively. I took a sound thrashing but it was probably the most valuable game of the day in terms of lessons learned.

Unfortunately it looks like I'm going to miss March's event at my regular venue, so I've got some time to retool my list. I'm going to look at relying on terminators less, or at least figuring out a more effective way to use them. For example: I haven't been taking the command squad because it's not a scoring unit. But if I'm only using Belial to disrupt enemy plans, it might be worth it. Also, a Deathwing apothecary is a 30 point upgrade, but it saves 44 points of terminators every time I make a successful Feel No Pain roll. Something to think about. I'll definitely keep the Aegis line, though - the quad gun was, sadly, the hero of the day. 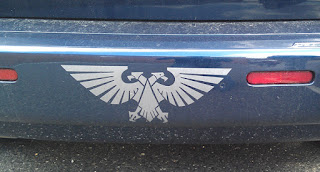 That's commitment. Would have been more impressed if the license plate was RH1NO, though.
Posted by Jason at 12:30 PM