Last March of the Ents

I don't have a decent camera setup right now, but that's no excuse to not share a little progress report on the state of my Dark Angels. Here's a representative sampling of everything that's fully painted to date, not including a few terminators who didn't make the cute, and a few more units (second Land Raider, Librarian on Bike, etc.) who are almost-but-not-quite-finished. 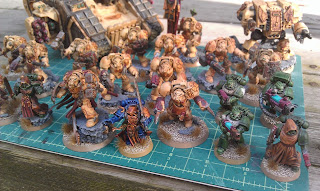 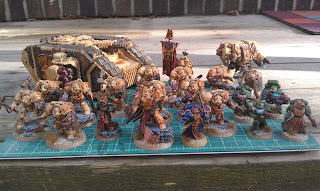 A Note on NOVA

I should probably write an extensive review of NOVA 2013, but I'm not going to do that. There are a few reasons I'm just not up to the task. For starters, the Internet has it covered. But mostly, it's just me, a mix of fatigue (I mean, I spent six months gearing up for this thing) and sensory overload (there's no way for me to do the event justice, so why waste words?).

However, it just wouldn't be right to let this go entirely unreported, so I would like you to know one thing: this was everything I hoped it would be, and more. I haven't been to a convention of any size for probably ten or more years now, but NOVA '13 made up for all of that. It was obviously a labor of love on behalf of the organizers and a team of the most devoted volunteers I've seen almost anywhere, so, great job guys. Thanks for everything.

There was so much going on that I didn't really get a spare moment during for a few days - between the seminars, vendor hall, surprise encounters with friends from all over, drinks in the VIP lounge, and dozens upon dozens of armies to check out, there was barely any time to squeeze in eight games of 40k.

If you attended, awesome. High five. I hope I saw you there. But if you didn't make it down, you need to make it a priority for next year. Some tips for new attendees after the jump: