After months of trash talking, I recently had the very good fortune to host my superfriend Ian for a Nurgle v Nurgle grudge match at Outside the Box Games in Voorhees, NJ. Bring it on! 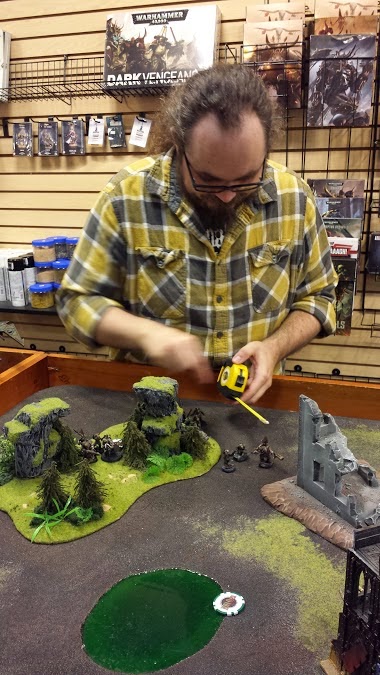 intense calculations
Ian has the superhuman ability to produce an extremely large number of high-quality paintjobs in a very short amount of time, and his growing Chaos Renegades list reflects that. Meanwhile, I have been feverishly churning out demons in order to expand my Adepticon list into something respectable. We were both eager to see how our relatively untested forces would fare on the field of battle, so after a quick game of Recon Squad (where we reached a draw, decided to play another turn, drew again, and repeated this process twice,) we were ready to get to the main event.

I'm warming up to the Maelstrom of War missions, and Ian wanted to try them, so we rolled up Cleanse and Control. I deployed first along the limits of the diagonal deployment zone, with fast units to my left, right, and center while my Flamers of Tzeentch and Daemon Prince occupied a central ruin and a unit of Plague Bearers skulked in the rear. The Great Unclean One and two squads of Nurglings went into deep strike reserve. 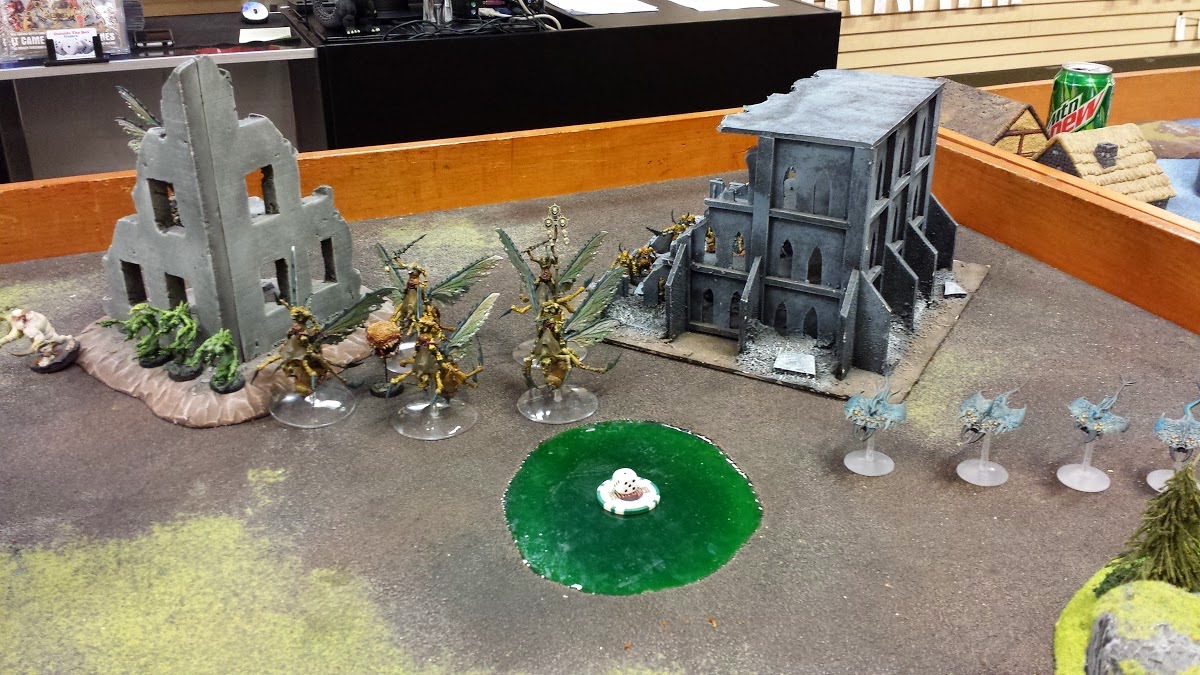 attack formation (not pictured, another unit of screamers on the right flank)

The renegades deployed conservatively, forming a wall of steel protected by a large squad of mutant rabble. The mutants were anchored by the presence of a Nurgle Lord in terminator armor, ensuring they had staying power, while a Hell Blade and Blight Drone lurked off the board. Finally, a squad of mercs and a squad of cultists stayed in reserve, ready to exploit developments in the upcoming battle. 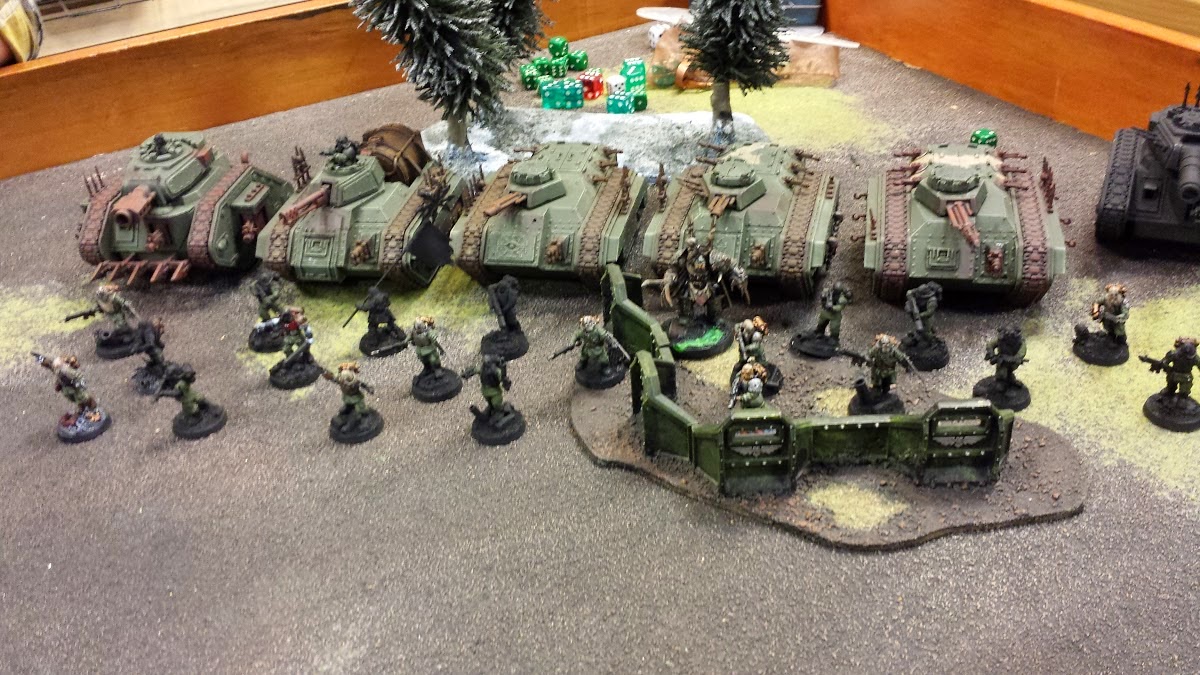 this flank is REFUSED!

As the game opened, I rushed forward with my army, sending a squad of screamers around either flank. I knew Ian was worried about their armor bane ability and I wanted to try to scare those tanks. The flamers did the same, while the prince soared forward in an attempt to get a poison template into that tempting unit of mutants. I also threw the plague drones forward in an attempt to get the icon near his forces. Ian responded by making careful targeting choices to methodically whittle down the smaller unit of screamers.

At this point I pulled two maelstrom cards for an objective that was in a place that was inconvenient for me to occupy but right in the middle of Ian's zone of death. Two points for one objective is hard to ignore, so I set about trying to secure the area and landed the prince while I moved the rest of the army forward. The plague drones were able to tie the mutants up in assault while the larger squad of screamers chewed up  the first tank in the renegade battle line (luckily for me, it was the tank with the gun that ignores cover - Nurgle's legions rejoiced in its demise!). The Great Unclean one was still chilling in the Warp, so that was it for the turn.

In return, both enemy flyers screamed onto the battlefield and began strafing the demonic forces with impunity, while the renegade mercs walked onto an unguarded objective.


Meanwhile the plague drones had finished up the squad of mutants, but were locked combat with the terminator lord, preventing them from bringing their "touch of rust" rule to bear on the enemy tanks. Both sides had been racking up victory points, with a slight advantage going to my demons. The demon prince was in position to slaughter the pathetic enemy warlord and teach him that no mortal may master the power of Chaos. It was time to grab Slay the Warlord. There's just the formality of overwatch and then we can move on to the carnage:


Rejected! The prince few into a storm of 6s, stripping his remaining two wounds and sending him straight back to the Warp. Next time, Gadget! Elsewhere the cultists ran onto the table to grab an active objective, but were met by the Great Unclean One, who finally realized there was a battle happening on turn 5. By turn 6 he was able to challenge the cultist leader for a maelstrom victory point, annihilate the squad for another point, and that was the game. A victory for demons, a defeat for the renegades, and an overall wash for Nurgle.

I haven't had a game of 40k outside of a competitive setting for quite a while, so this was one of the more memorable games I've had. Maelstrom of War put Ian's army at a slight disadvantage, and I think his decision to castle up in the corner really hindered his ability to grab victory points. I don't blame him, though, as the demons are pretty fast and distributing his forces would have allowed me to approach his army piecemeal. Unfortunately a lot of it came down to chance, which is just part of the deal when you play the Maelstrom missions, but I still really enjoy them for making the game more dynamic and forcing you to fundamentally change the way you approach your army construction.

More importantly, though, it was a pleasure to play against a beautifully painted army and based on what Ian has shared with me regarding his plans to expand the renegades, the rematch will be even better.
Posted by Jason at 10:38 AM