The dust has cleared, and the battle for Solypsus 9 is over. This was the final event (or is it...?) in a series of monthly narrative tournaments, and it was a huge success and a fitting end to the series. 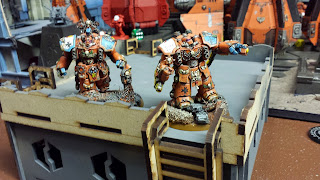 Alex's Sons of Dorn stand resolute amidst the fiercest fighting

My teammates, Lovell and Colin, deployed their forces in the thick of it while I spent the game fighting a counter-flanking action against Joe's (in)famous Kingbreakers. I took heavy damage during the Imperium's opening gambit, losing B'elakor and a squad of Flamers of Tzeentch before my first movement phase. Luckily, I had other plans in mind, and with the use of an apocalypse stratagem, was able to deep strike Scabiethrax the Bloated into the Kingbreakers' firebase on turn 1. Now, there was merely the trivial matter of an Imperial Knight to contend with, and the sweet, sweet Kingbreakers souls would be mine for the reaping. 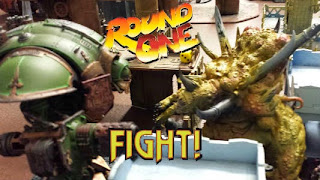 Completely oblivious to the main assault all the way down the table, I set about attempting to control my own little world. A strong force of Kingbreakers in drop pods and Legion of the Damned swept me off my home objective, so I sent my Screamers forward to clear a small squad of Blood Angels off the starport's launchapd, a midfield secondary objective. That launchpad was to become my arena, and most of my army spend the game in a protracted assault with space marines over the secondary objective. Luckily, the presence of Scabiethrax distracted the knight, providing some much-needed relief.

Meanwhile in the Imperial backfield, a squad of Assault Terminators valiantly charged the gargantuan daemon, holding it in place until the Knight could join the fray. The two Lords of War went toe to toe for a few rounds like something out of Pacific Rim, while Joe and I fed lesser morsels into the battle in an attempt to tip the scales. However, in the land of the stomp attack, even the heaviest infantry is a gnat, and hammernators and Screamers alike were quickly removed from the table.

Pitting Scabiethrax against the Knight was a relatively reckless gamble – it would only take a single solid blow from the knight's massive chainsaw hand to gut the daemon. In the end, luck and superior weapon skill won the day, and the Knight was not able to land the fatal blow. Luck smiled on the daemon lord even further, allowing him to survive the blast of the Knight's death, and he spent the rest f the game holding the Kingbreaker's home objective, content in his role as an extremely effective paperweight.

Ultimately, the forces of Disorder did not carry the day, but I was able to claim top honors for my team (probably owing to the fact that I was able to avoid the heaviest of the fighting – sorry Colin!) as well as the painting score for my team. This was an honor I did not feel I deserved as I have not yet finished painting Scabiethrax, but I was very grateful nonetheless. This was definitely the best game of Apocalypse I've played, and I think we hit the exact sweet spot in terms of players/points/table size/terrain distribution. That's not easy to do and is largely in part to Joe's meticulous planning.

If you haven't read Joe's report on the battle, seriously, go read it now.
Posted by Jason at 9:47 AM