The miniatures were painted, the board was arranged, the trash was talked. It was time to begin the campaign in earnest. 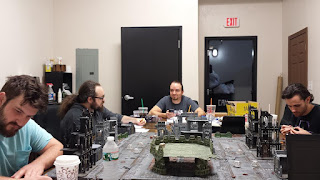 We spent the first part of the day generating characters and learning the basics of the Inquisitor rules. Inquisitor is an unusual game – there's no points system, and your character should by all means have access to virtually unlimited resources. At the same time, though, balance is important, and the presence of too much upper level equipment and skills trivializes some of the more characterful parts of the game. What you really need is a group who understands that half the fun is having a character's gun jam when he's pinned down behind a tank of highly explosive promethium. It also helps to have a GM who is experienced with arbitration, and luckily, we did.

In order to make things interesting, we decided to have separate briefings for each player. After our GM had spoken privately with each player, we got a very quick description of the situation: on a planet within the Cetis Sector, on the outskirts of a megacity, there is an area of slums wracked by earthquakes and subsequent riots. Intelligence has indicated that an exchange is about to take place in the slums, and although the nature of the item is not entirely clear, there can be no doubt that this commerce is unwholesome. Enter the Inquisition.

Into the Dark Millennium

Being a miniatures hobbyist is about imagination. For most of us, very little of that creative energy goes toward imagining alien worlds. The vast majority is required to maintain the sort of deluded optimism needed to sustain a myriad of various projects. For example: I imagine I will finish painting these figures before the next big tournament. I imagine I will paint that high-concept counts-as army that I came up with on my drive to work. I imagine it should be possible to paint "just a small starter army" for that sweet new kickstarter whatever.

Dark Millennium is the brainchild of this guy. It's a collaborative campaign (meaning, we'll periodically switch the role of GM) using the Inquisitor ruleset, converted for 28 instead of 54 mm miniatures. It's partially cooperative and partially competitive, not really a wargame but not fully an RPG. It's weird and wonderful and it takes the right group to really make it work, and my fellow players, the Battleground Games crew, are that group.

Our GM Ian took us through character creation and the Inquisitor rules. Other than a few areas that seemed to be lacking (there doesn't seem to be much room for stealth characters), I was very impressed with the Inquisitor rules. It's an action RPG that requires miniatures. No surprise there, but it turned out to be (in my opinion) deep enough to allow a wide range of characters, play styles, and interactions without being too clunky.

Not everyone could make it to our inaugural session, but let's meet a few of our contestants. 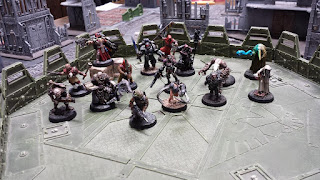