My Dreadtober challenge is now complete with two weeks to spare. Hopefully this will go some distance toward clearing my reputation as a slacker... Thanks to Greg for organizing the event, and to Joe and John for the glamour shots! 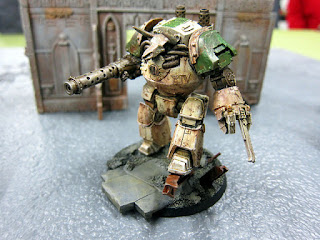 The Contemptor Dreadnought sardonically titled "The Bronze Bull" by brothers of the Death Guard was devised by Mortarion not as a means of rewarding faithful service, but as punishment for the legion's worst breaches of discipline. Beyond the standard motive, weapons, and life support systems, the armor carried a compliment of stimulant injectors, neural whips, and other pain inducers, so that every moment inside the suit would be constant agony for its occupant. In addition, the armor was fitted with an enhanced voxcaster that broadcasted the pilot's screams of rage and pain. In order to make room for these modifications, the armor's sensor package was diminished, so that in combat the pilot will tend to engage the enemy directly to his front in a thundering charge.

Not many wore the bull throughout its short history in the Death Guard, for it was a terrible punishment indeed. The armor was occupied at the end of the Heresy, however; abandoned on a backwater world, forgotten for millennia, now become a god of tyranny crusted in the grime of the ages...

I had a lot of fun painting this guy, I learned a lot, and it's my first Chaos Space Marine model, so technically I started a new army. Not bad for a few weeks of painting.

More angles after the jump: 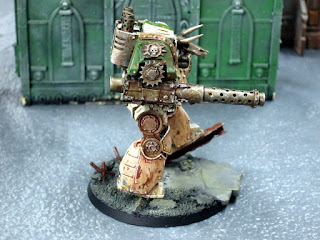 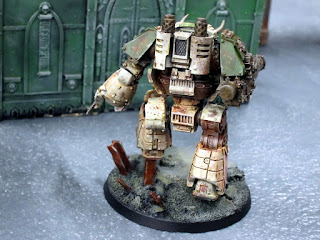 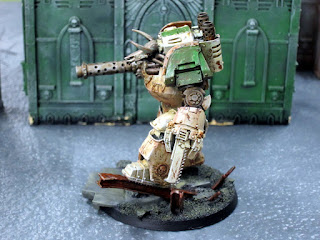