We Can Rebuild Him

Space marines, and their distinctive power armor, are without a doubt the most iconic element of Warhammer 40,000 (with the possible exception of skulls). We are told they are 8-foot tall genetically engineered juggernauts. But when you assemble your space marine using the parts that come in the box, and set them next to a lowly cultist model, you may feel a little deflated: 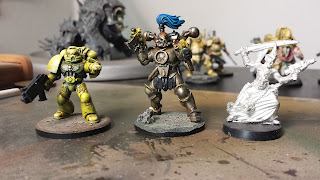 aren't you a little short for a stormtrooper?

A few days ago, I got a wild hair to try the popular Stormcast Eternal/space Marine mashup. I'm pretty happy with the outcome. The "Sigmarine" could probably stand to be a little more 40k-ified, and I have some ideas on replacing the greaves to be more in line with standard power armor. Overall, I'm perfectly happy with the plate mail appearance, which definitely fits into my interpretation of the Warhammer aesthetic. Finally, a paint scheme that isn't Iron Warriors, with chipped paint and military decals, would probably help sell the look.

My intention was to use as few components from the Stormcast Eternals as possible. That would mitigate the effect of simply being a knight holding a gun, and give me access to the library of available space marine components. I tried using a modified space marine torso, but unfortunately it's not quite wide enough from shoulder to shoulder.

A more talented sculptor or patient modeler could make a number of improvements to this design, but I'm pretty happy with the time/cash:payoff ratio on these guys. After bits purchases it works out to $4-$5 to upgrade each marine. That's not negligible, but if it's a choice between having a smaller number of models that I enjoy or a large force that leaves me feeling cold, I'll pick the cool models every time. Life's too short to play with boring models.

So the prototypes are a success, and I'll incorporate some improvements into the next generation. I don't think I can go back – it's true scale power armor from this point.
Posted by Jason at 11:57 AM