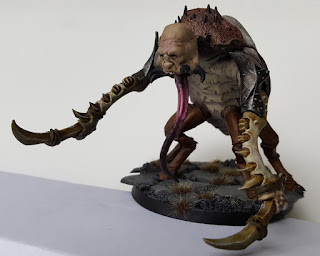 Rahab, Angel of the Depths

When the Traveler came to Chalcydon, Cardinal Absalom was one of the first of the Ecclesiarchs to barter with the Ruinous Powers. It was Absalom who handed over the keys to the ancient bioweaponry vaults beneath the Cathedral of Saint Sebastian Thor, and in recognition of this blasphemous act, was transfigured by Father Nurgle into the daemon prince known as Rahab. Now the Angel of the Depths, Rahab scuttles among the roots of the underworld with an endless hunger, devouring the soul-scraps left by greater beings.

A few weeks ago I ran across a preview of an upcoming release from Mierce Miniatures, and as soon as I saw this model I knew it would enter my collection not as Thacaldan Mound-Beetle but as some sort of hideous Nurgle beast. The very nice people at Mierce were willing to sell me a copy before the general release, so I placed an order and the model crossed the Atlantic in record time. I really could not be any more impressed by the customer service Mierce provided – their communication was always prompt and polite, and they were able to manually place my order as the model was not yet available for sale through their website.

Even though I think Mierce has some of the very best sculpts available in the world of miniatures, I wanted a different sort of beetle so I decided to convert the head and forelegs. The model is cast in a sort of rubbery resin that holds detail very well, but is also very light and easy to work with. I was able to pin the arms very easily. Mold lines were minimal and easily removed (although of course I missed quite a few that I only discovered halfway through painting). I had a slight mishap during the early painting stages when one of the legs broke at the knee despite very gentle handling, but I was able to repair the miniature without any difficulty.

This mini was a complete blast to paint and was absolutely worth the time and expense. Sadly, I don't think I'll have the opportunity to the Darklands game any time soon, but I look forward to adding more Mierce creations to my creature collection in the future. 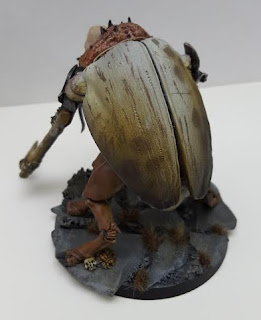