Our Lady of Perpetual Horror, In Progress

I've built up a fairly large collection of painted models over the last few years, and now it's time for a display board. Inspired by my Socratic daimon, I headed out to the craft store and returned with copious amounts of styrofoam, glue, and clay. Over the last few days, I've been laying down obscene amounts of liquid nails and styrofoam blocks to form the main landscape of the base, but in the meantime I also tackled the board's main feature: 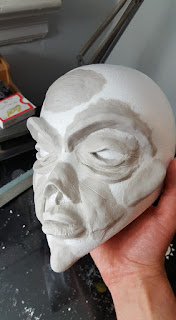 a horror from the third moon of chalcydon!

Realizing that creepy faces have become sort of a motif in my Chaos Daemons army, when I saw the styrofoam head, I knew what I had to do. I've used air hardening clay for the sculpt. I started with the lips and worked my way outward, taking about three and a half hours for the whole process. Originally, I wanted to mimic the stone head from Prometheus, but as I worked, little bits of Red Skull and general ad-libbing entered the picture. This was my first attempt at any sort of real sculpting, and the time flew by. Now it's time for the agonizing wait as I continue to add glue and spackle to the board, but I'm looking forward to next week, when I'll be able to start adding the details and get it painted.

As with all of my projects, I only had a vague plan, but you can follow along with my sculpting below: 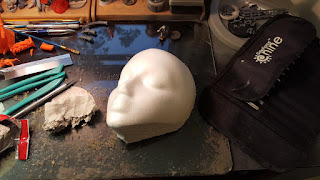 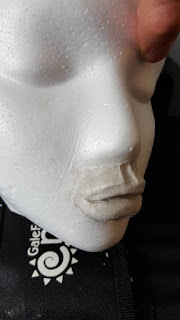 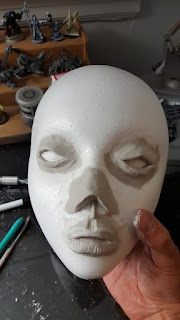