Let's take a look at the first Hired gun for War of the Rats, our Shadow War: Armageddon league: 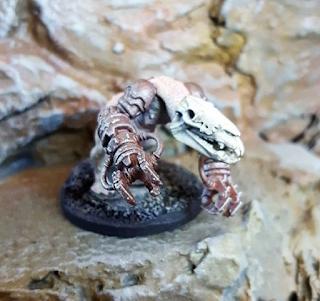 Hired Guns may be added to any Kill Team's roster following the rules for Special Operatives. A Hired Gun may be employed by any Kill Team, regardless of faction (life is cheap on the galactic frontier, and alliances shift frequently!).

The B.E.A.S.T. was designed to track and subdue quarry in dense terrain. A horrifying fusion of man and machine, this assault servitor is surprisingly agile and has been outfitted with a full compliment of scanning technology to allow it to track its prey. It is relatively easy for a Kill Team to hijack the unit's controls, setting this unrelenting stalker on their foes.

Wargear: The B.E.A.S.T. is armed with two lightning claws.

Unrelenting Stalker: B.E.A.S.T. has the Evade and Infiltration stealth skills.
Posted by Jason at 9:42 AM